Google Play Announces The “Best Of 2017” in Apps, Games and Other Categories

It is a daunting task to search for the best app you need on Playstore as it is flooded with millions of apps. So this list would assist you to pick the right ones as they are chosen by Google based on opinions and performance. So pay a sneak peek into the list of Best Apps that performed well in 2017.

Socratic is an educational developed to assist students with their homework. This app lets users take a snap of their homework and analyses them with an AI engine to provide them with the best solution. Apart from providing solutions to maths problems the app also rescues you from other subjects like Science, History, Biology, Algebra, US History, or Chemistry. Socratic can help you learn better and faster! While most Android apps are being blamed for killing children’s time Socratic is working to improve their abilities and it definitely deserves to be the Best App On PlayStore.

From the creators of the hit games Cut the Rope and King of Thieves, comes the most ingenious and stylish battle bot constructor! Join more than 50 million players from all over the world and become the star of the Arena!

Its unique feature set have made the game to top the lists for 2017.

Features:
• Be a master engineer: design, craft, upgrade, and improve the ultimate battle robot!
• Take the role of a mean street cat and fight against other players in fast and hilarious PvP action!
• Discover dozens of crazy weapons, gadgets and body shapes. Outsmart your opponents with your unique robot design!
• Create a powerful gang and rule the streets! Participate in gang battles to win unique parts, make new friends and share your secrets in gang chat.
• Battle against real players and fight your way to the top of the World Championship!
• Bet on other bots and share replays of your best fights!

Here we have collected and listed all the popular apps for the major categories on PlayStore. Pay a glance at them and check if you are having the best of Android apps and games on your smartphone.

Most popular new games of 2017

To know more and check out all of the categories and options, head to Google Play Store now!

Google Play Announces The “Best Of 2017” in Apps, Games and Other Categories

by AppBeep time to read: 2 min 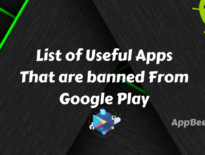 Apps 7 Very Useful Android Apps that are not Available …
1
We use cookies to ensure that we give you the best experience on our website. If you continue to use this site we will assume that you are happy with it.OkRead more